Travel Throne
Home Destinations Europe Why and How to Visit Sintra, Portugal

Every little kid dreams of castles. Strong rocky fortresses where soldiers guard against siege. Delicate pink palaces where royal families survey their kingdoms. I think that is part of the reason a visit to Europe is so universally appealing. There is something to satisfy everyone’s grandiose childhood fantasies. 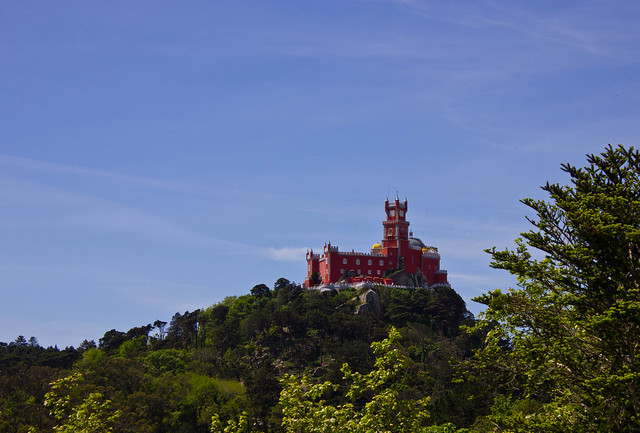 Pena National Palace as seen from the Moorish Castle

Especially in Sintra, an easy day trip from Lisbon that will fulfill all of your castle-related dreams. This town has not one, but three major castles (and a couple accessory castles, one of which will be the subject of Friday’s post). The entire area surrounding Sintra is a UNESCO World Heritage Site due to it’s history and beauty. 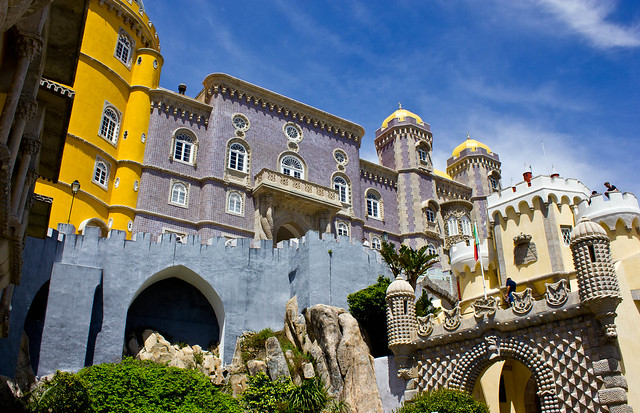 With it’s pastel colors an extravagant architecture, this palace looks like it was ripped out of a Disney movie. In fact, the Pena National Palace is a classic example of 19th century Romantic architecture. It was constructed by King Ferdinand and Queen Maria II as a vacation home. The opulence of the place may have something to do with why the royal family was exiled in 1910 and Portugal became a republic. Since then it’s existed primarily as a tourist attraction. 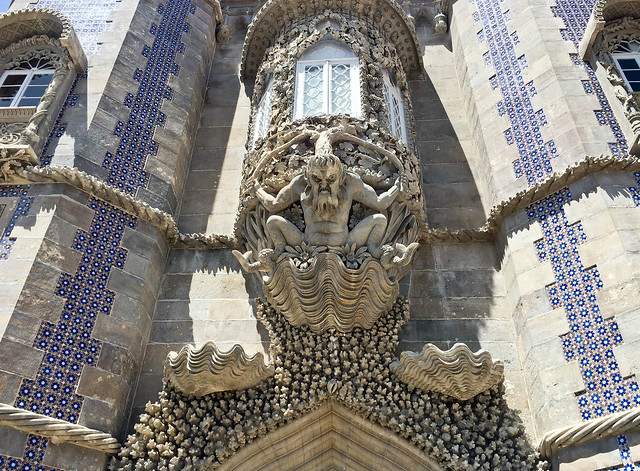 Both the inside and outside of this palace are absurdly beautiful and strange. It has some terrificazulejos too. 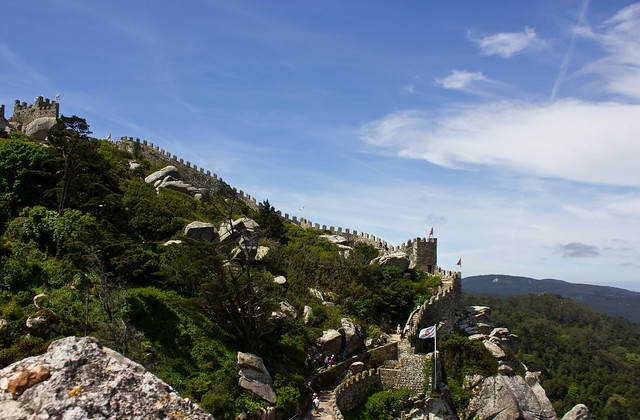 The “Moorish Castle” is an enormous, crumbling fortress perched high above Sintra, with views stretching all the way to the sparkling sea. It was built in the 8th and 9th century during Muslim rule of the Iberian peninsula, then used on and off for 500 years after. It was damaged during an earthquake during the 18th century, then restored. Now it’s mostly just ramparts and walls, but really impressive ones. 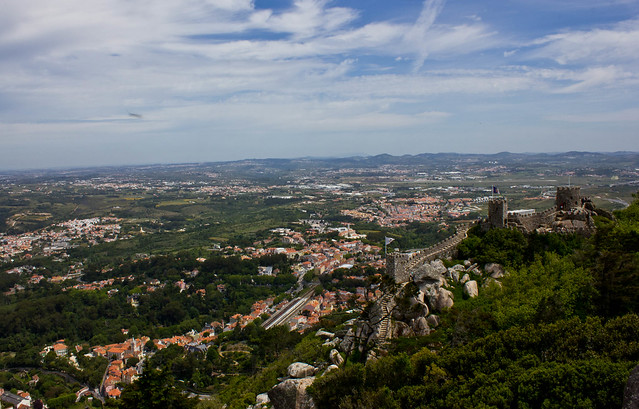 Pena is definitely the showstopper attraction in Sintra but I actually liked this castle better for it’s long history and staggering views. 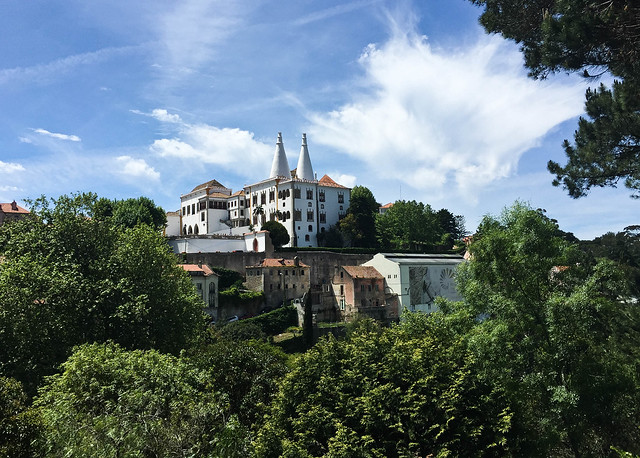 Unlike the other two castles perched high in the hills, this palace sits smack in the center of town. It was the official royal palace for half a millennium and is the best preserved medieval palace in Portugal. I didn’t tour the inside of this palace but the outside is pretty neat looking.

Getting There: It’s easy very easy to get to Sintra from Lisbon. Simply hop on the train at Rossio Station (buy your ticket via machine at the entrance, the cost is about €4.30 for a round trip ticket). Trains leave every 15 minutes or so, even on the weekends. The journey takes about 40 minutes.

Getting Around: Technically you CAN walk to Palácio da Pena and the Castelo dos Mouros, but I would only recommend it to the most dedicated hikers. It’s an hour of nearly straight up hill trekking on a narrow, heavily trafficked road, and on a hot day you will be cursing every bus that passes you by.

Likewise, there is no point in shelling out a ton of money for the Hop On Hop Off Buses that are advertised everywhere outside the train station. Unless you are planning to explore the area extremely in depth, there are only three real stops you’ll need to make.

Instead jump on the 434 bus which stops right outside the train station. It makes only 4 stops: the train station, Castelo dos Mouros, Palácio da Pena and downtown Sintra. For €5 you can take it all day. 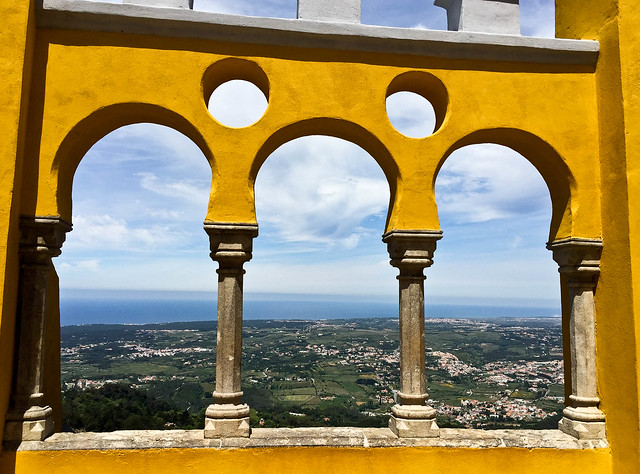 Admission Prices: This one is going to sting. Tickets to visit the palaces are certainly not cheap, but they are definitely worthwhile. Prices vary depending on age, time of year and how many of the palaces you visit (you get a discount for purchasing more than one ticket at time). During the summer it costs €8 per person to visit the Moorish Castle and €14 to visit Pena National Palace. You can view all the prices as well as a “price simulator” here.

You can buy tour tickets online or at the entrance to each of the castles.

Prepare for the Heat– We visited in early May and temperatures we’re already close to 90 degrees in the afternoon. Visiting the palaces takes a great deal of uphill walking and climbing. Start early in the day if you can, to avoid the hottest part of the afternoon.

Learn from my mistakes and wear a liberal amount of sunscreen, and a hat for good measure. Carry water with you and take lots of breaks as needed.

Food– The castles each have a food court, but the food is overpriced and frankly not particularly tasty looking, so you are better off eating lunch in Sintra’s old town. Most of the restaurants are touristy and overpriced here too, but there are a couple of bakeries where you can buy a decent sandwich for cheap. 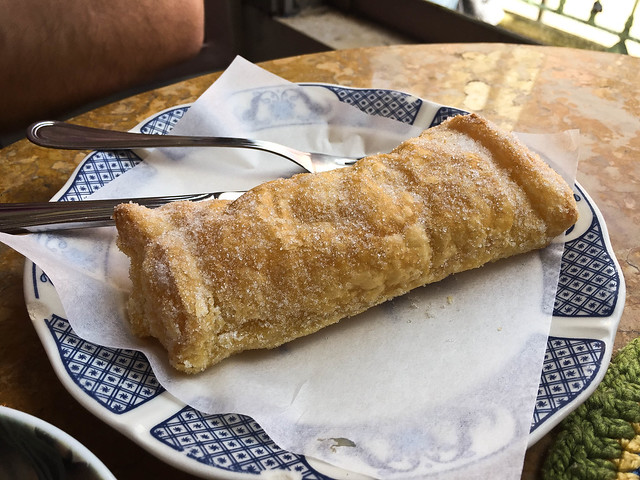 Ther are a couple unique pastries worth trying in Sintra. Queijadas are a tiny but delicious cheesecake and travesseiros are a rectangular pastry filled with egg cream. Both are very tasty!

For coffee and pastries check out Cafe Saudade near the train station.

Why you would Love to visit London in winters

Essential Things You Need on a Successful Gulf Fishing Trip

Things to do in Geelong, Australia

Travel Throne features writers who give you the scoop on what’s happening around the world. You might get to hear about one of our latest nocturnal adventures happening in France—or even get a glimpse of what it’s like to be kickin’ it on a sun-drenched beach in Australia.

Top Things To Do In Melbourne, Australia

10 Things you cannot afford to miss in Malta

What stories will you tell?

Warm beaches and crowded bars – Top things to do in...

Your next tourist destination: Malta

Why you would Love to visit London in winters